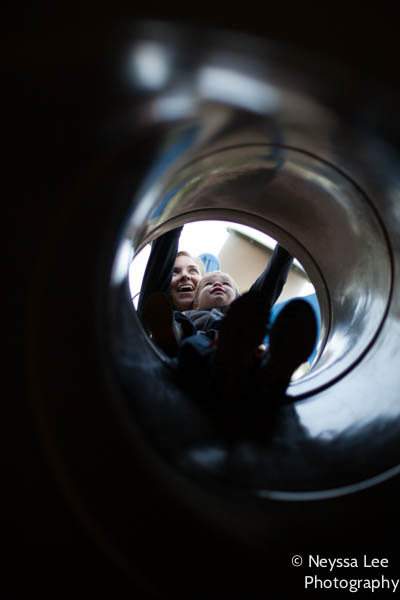 Running the Bases | Adventures with the Lees

Adventures to the park are my favorite kind – sliding down slides, running the bases, what could be more fun? We have had some pretty amazing fall days lately, and being true Washingtonians, we knew we have to take advantage and get outside while we still can. Last week, we had to pick poor Sadie up from the vet. On the way home Milo started chanting “park, park, park” (which sounds a little bit like “pork, pork, pork” but since he’s never had pork, we guessed he wanted to go to the park). I’m so glad we listened to him. We had the place to ourselves. Okay, there was a football practice going on, but no one was on the playground.
This particular park has the tube slides, which are a little difficult for Milo to climb into. Derek took Sawyer down on his lap and Milo decided it was time for him and I to take a trip down together. Look at this AMAZING photo my husband took. He hasn’t taken my workshop, but he’s been learning from me for a while. Isn’t he getting good. I just love how he thinks for these different angles. (I think I’m a little nervous about fitting down this slide with Milo on my lap!).

After the playground, Derek thought it would be fun to take Milo to the baseball diamond. They were running the bases for quite a while, as you can see from the photo below, Derek pooped out long before Milo did. When on our adventure, I knew that I wanted to capture this fleeting time where Milo is smaller than Derek and loves being chased. To capture this shot, I sat on the ground near 2nd base. I wanted to shoot from just below Milo, to be able to get the idea that he’s getting bigger, yet you can see Derek behind him to help show he’s still small.

A quick photo tip: When capturing running shots, make sure to give your subject space to run into. In the photo below, you can see more dirt of where he’s going. If you’re shoot horizontally, allow your subject room to run! Don’t forget to take your kids on an adventure this week! It could be big or small, but I’d love to hear about it. Leave me a comment and tell me what adventure awaits your family!

P.S. Tomorrow I will show some of the beautiful images the women in my workshop took, and tell you all about our day together. They have truly transformed their camera skills!