Recently I was fortunate to take photos of a growing boy. But not just any boy, a young man who’s family I have captured for several years now. A few years ago I captured his big sister just as she was turning 8. Now it was his turn to turn 8 and for his own personal photo session. Same beautiful location, same loving mother bringing her child, yet a completely different shoot – as you would expect when capturing an 8 year old boy vs. an 8 year old girl!
We began the session with photos of a growing boy in a suit and tie.  And I saw “Growing Boy” because I feel like he was growing in front of my eyes. I couldn’t believe how much he’s grown since his family’s last session. Isn’t he such a handsome young man?

Like I said, handsome right? What makes it even better was that he told his mom after our session he had fun! After a few “formal” shots, he changed into more comfortable clothes and we were really able to have some fun. Although I told him not to smile and this is what he did. Rebel this one is! We also walked along logs…. and played on the beach. He did try to show me how to skip rocks, but I was a lost cause. 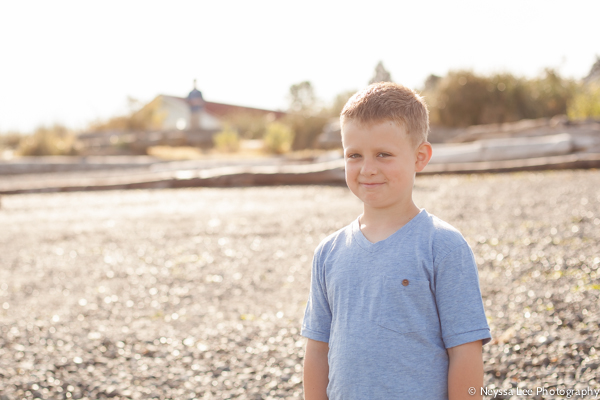 While I had many favorites from this session, like this sneak peek I had posted on Facebook, the image below was my very last shot when he thought we were all done. He jumped up on this piece of drift wood and looked out to the water. It was such a quiet and reflective moment to be able to capture. For me, this wasn’t just about photos of a growing boy. I loved getting to know this young man on a more 1-on-1 level. Such a great idea, to have special shoots for each of your children! Thank you, Mr. D for spending a sunny Saturday morning with me at the beach!

Back to School Mini Sessions »

« Capture Her Playing with Baby