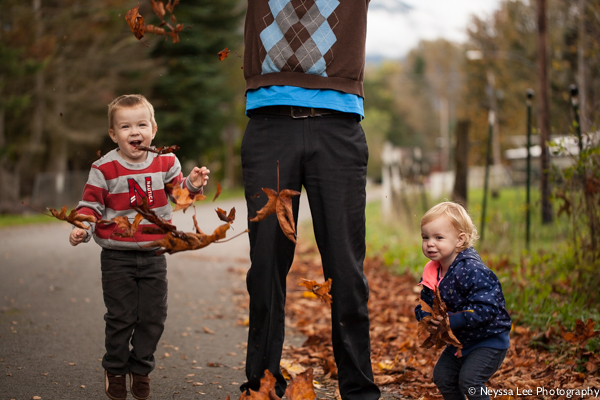 I love leave throwing photo tips, because I love leaf throwing! What kid doesn’t love playing in the leaves, and getting to throw them into the air, too?! It doesn’t get much better than that.  This was even a photo excursion that my husband was excited to get in on! (Honestly, he suggested taking the kids for some leaf throwing fun down the road!).
The family and I walked, camera in my hand, down the road to a near by quiet street where a large tree had dropped lots of leaves. Then it was time for some leaf throwing! I wanted to capture the kids throwing the leaves into the air, but I also wanted to capture their expressions as the leaves fell around them.

With my camera in continuous shooting mode I was able to get a burst of photos back to back and capture this series of images. Notice that Sawyer never actually throws her leaves! Since I wanted the focus to be on the kids and not the surrounding area, I selected a lower aperture (all these images are shot at f/2.8 – the widest that particular lens goes). However, I also wanted both kids to be in focus!

By lining the kids up, they are on the same focal plane, allowing me to capture both of their adorable expressions. And look, Sawyer finally threw some leaves! I wanted a few shots of Derek’s face in the images, but he was too tall to stay closer like I wanted the shot. So I asked him to kneel. Of course, Milo had to kneel too – yes defeating my purpose!

Get down on their level.

I am sitting on the ground to put myself at Milo’s level for all of these shots. I wanted the focus to be leaf throwing from their viewpoint and if I was shooting from above that emotion would’ve been lost! Leaves have great color and texture. I love how they can blur out in photos and make a beautiful background.

Look for new ways to use the leaves.

I love this in-between moment of Milo. He was pilling his leaves up, and telling me he was making a “BIG, BIG pile!” I snapped the shutter just as he looked up at me. The light in his eyes and the leaves behind him make this a beautiful portrait of my boy! Of course the kids wanted mommy to throw some leaves too. I wasn’t going to turn them down so I handed off my camera to my husband.

Get in on the action!

This moment my husband captured of the kids and I is priceless. I know that in years to come that will look at the images of them throwing leaves and see that not only did mommy capture it, but she joined in too! By presetting the camera and handing it off, I made it less of a burden for Derek to take a great photo of me with the kids. Yet, he took matters into his own and I love this angle he captured. I’d say he’s becoming quite the photographer! Now’s its your turn. Take the kids out and use these leaf throwing photo tips and capture your own special moments!

P.S. Shooting in manual and understanding your camera will make your images shine that much more. Don’t let the technical side stop you! Learn how to use your camera at my Photography Workshop for Moms! There are still a few spots left for my November 8th workshop (the last one of the year)!