Toddlers are tough to capture so I’ve put together 7 tips for photographing toddlers! These tips honestly could apply to kids of all ages (and even some husbands) but toddlers just flowed nicely in the title!
Just before Milo’s 3rd birthday I wanted to do a little photo session. While I love capturing everyday moments, I wanted a few nice portraits of him just before his birthday! I followed these tips to capture some beautiful photos of my sweet boy!

1. Set the stage and remove distractions! Before I get the kids ready for photos I set up my location. I don’t want a bright red kleenex box taking away from the moment I’m trying to capture. When shooting outdoors, become aware of your surroundings. If I’m doing at a park or along a trail, I know that I can’t actually remove the stop sign that I find so annoying in an image. However, I can choose another spot or change my angle so that the sign isn’t in my photo! To demonstrate how something can detract from an image. While I had already set the stage, my 18 month old distraction with a bright green and blue hat ran into the photo to sit behind Milo. While I have a great smile on Milo’s face, my eyes keep focusing on the bright green hat behind him! Should I have “removed” that distraction beforehand (or enlisted dad’s help to keep her contained) I wouldn’t have had this problem. However, you get the point, that if you have control over something distracting, remove it! You’ll be glad you did!

Bonus Tip: To save the photo, try turning it black and white. This works really well when the distraction is mainly due to colors, like Sawyer’s hat! I still get Milo’s’ great smile with fewer distractions! 2. Set a Time Limit. If you’re doing a more “staged” shoot, the kids are much more likely if they know that it will end. Depending on your kids ages, I try to do 15-20 minutes if I’m wanting them to fully cooperate, look at me, and smile.  Older kids can typically handle a longer time. You may need to physically set a timer. If they hear it go off and you stop, they will most likely be more willing to play along with your photo shoot because they know you stick to your word. 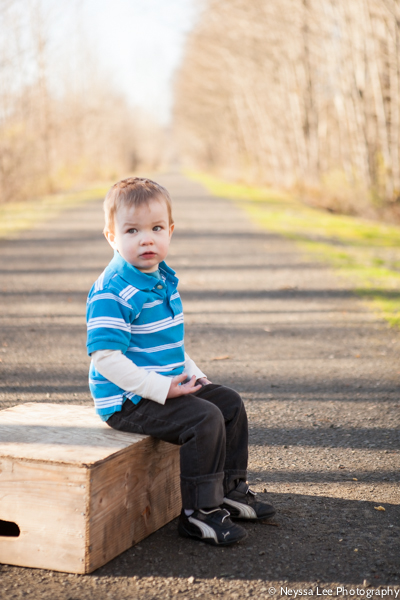 3. Have a Plan. Know what you want to capture before you start shooting. This doesn’t mean, “I want to capture cute photos of my kid.” That’s too vague, how will you know when you’ve achieved your goal? Aren’t they always cute?! (Maybe not at 2am when they want another glass of soy milk…) The point is have a plan for what you want to shoot so you’re not wasting time trying to figure out what you’re trying to capture. As mentioned above, kids don’t have the longest attention span! For Milo’s 3 year old photos, I knew that I wanted a few nice shots of him, showing off his handsome smile! 4. Use Rewards! I’m not above using bribery to get a couple nice shots of my kids. Especially when they are younger and have zero interest in taking photos for mama! But you must also actually give them the reward! If you promise a trip to the park, follow through, otherwise they won’t want to cooperate the next time. Also, if you’re using food but know that you want to still be taking photos, use something that isn’t messy! My favorite is smarties because it doesn’t leave messy faces like chocolate does! Of course, for this photo shoot, I used a cupcake knowing it would make a mess, but that’s the fun of it! Milo LOVES cupcakes, so it fit right in with documenting him as a 3 year old. To make it more fun, his cupcake danced above my lens, causing great smiles and laughs before he got to eat the yummy reward. 5. Play With Light. Whether you’re shooting outdoors or indoors, play with the available natural light. If you’re indoors, try placing your subject in front of a bright window for dramatic backlighting. Outdoors, see how your image changes as you allow more or less light into your lens. For my Milo’s shoot, the sun was setting so beautifully and shining through the trees. I crouched down low to allow more light into my lens, creating a little sun flare in my image. I love how light is filling the image as Milo sits enjoying his cupcake! 6. Be Flexible and Let Them Be Little. You may not always get them to sit nicely and smile for the camera, but that is okay. There will come a time where your kids will sit nicely for the camera and give you a forced smile because you asked them to. You will find yourself longing for the days when a little peek-a-boo would bring out a big belly laugh. For Milo’s shoot, he was growing tired of waiting for his cupcake sooner than I would’ve liked. Instead of forcing the issue, I gave him his cupcake. I captured a few images that I LOVE and tell his story. Like this next image, where he’s only eating the frosting! I’m usually surprised that when I let them be little I get even better images than I had planned on! 7. Learn How to Use Your Camera. Toddlers are quick and their attention spans are short. You don’t want to be messing with settings and missing the moment he sits down and actually smiles for you! Join me for a photography workshop where we talk about camera settings (get off auto mode), using natural light, and how to be the storyteller for your family. My next Growing CONFIDENCE Workshop is May 31st! The perfect Mother’s Day gift! So tell your husbands you’d like to learn how to use the expensive camera you have instead of using it like a point and shoot!